2020 was a tumultuous year, the effect of which will be felt for years throughout the world and the arts industry. Tinalley was immensely saddened when not only were all of our performances post-March 2020 cancelled, but the borders were closed between New South Wales and Queensland, preventing the Sydney/Brisbane based members of Tinalley from meeting at all.

We are thrilled however that the borders have now reopened and we will shortly announce Tinalley’s plans for 2021.

We look forward to being with you again in 2021.

It is with a heavy heart that we announce that we will not be performing at UKARIA with John Bell in April and it appears that more of Tinalley’s performances in May and June will also be cancelled.

Our thoughts are with the many presenters and music venues around the country who are making the difficult decision to close, and arts organisations both in Australia and abroad who are now facing uncertain times as a result of COVID-19.

We may not be able to fill your hearts with live music but we implore you to keep the music alive, in your kitchens, living rooms, bedrooms and gardens, and feed your souls (and that of your neighbours!) with glorious music.

Adam, Patrick, Justin and Lerida wish you and your families the very best at this difficult time.

“I am delighted to continue as Patron of the Tinalley String Quartet.
“For more than 15 years the Tinalley String Quartet has moved and inspired music lovers in Australia and around the world. Their ongoing contribution to the arts at home, nurturing the next generation of talent and in promoting Australia’s musical talent on the world stage, is significant.
“As both a fan and their Patron, I look forward to continuing to support them.”
Words from the Governor-General of Australia His Excellency the Honourable David Hurley AC DSC   (Retd)

Tinalley String Quartet has launched its second album on the DECCA Classics Australia label. Featuring String Quartets Opus 12 and 13 of Mendelssohn together with a collection of newly imagined songs featuring Australian soprano, Greta Bradman.  The album was launched on Valentine’s Day at The Dome, Collins Street, one of Melbourne’s hidden architectural gems.

Tinalley has always felt a strong affinity with the string quartets of Mendelssohn, and having lived with the Opus 12 and 13 string quartets as a core part of our repertory for so many years, it seemed fitting that we would record the works on our second release for DECCA Classics Australia.

In 2018 the Quartet programmed the Opus 13 Quartet together with the song ‘Frage’ by Mendelssohn, that served as inspiration for his Quartet.  Tinalley collaborated with the acclaimed Australian soprano, Greta Bradman and composer, Calvin Bowman to reimagine ‘Frage’ from its original version for piano and voice, to a luscious new form for string quartet and voice.  Following the collaboration, Tinalley had the idea to include Greta singing ‘Frage’ on the album, and if we were to have the talents of Greta and Calvin at our disposal, why stop at one song? Why not a collection of songs?!

Australian soprano, Greta Bradman needs no introduction to audiences both at home and abroad as one of Australia’s most celebrated operatic and concert artists. Greta has sung extensively in the United Kingdom, United States, Europe and throughout the Asia Pacific.  She has performed for world leaders from the UK, USA, China, India, Monaco and Australia; highlights include singing for Barack Obama, and a 2014 recital in St James’s Palace for the British Royal Family. Winner of the 2013–14 Australian International Opera Award and the APRA/AMCOS Award in 2013, Greta is a Helpmann Award and ARIA Award nominee. A registered pyschologist, Greta sits on advisory boards including those of the Australian Mental Health Prize and the Arts Wellbeing Collective (AWC), and is also known to Australian music lovers as a regular presenter on ABC Classic FM.

Australian composer, Calvin Bowman is renowned as an organ soloist; accompanist; chamber musician and composer.  A proponent of the Artsong, Calvin is a laureate of the Ned Rorem Award for Song Composition, the Diana Barnhart American Song Competition and the English Poetry and Song Society Artsong Award. Calvin is an exclusive DECCA/UMA artist and was the first Australian to graduate with a Doctor of Musical Arts from Yale University with the assistance of a Fullbright Scholarship.

ABOUT THE ALBUM ARTWORK

Designed by Tinalley’s Creative Director, Christie Brewster, the album cover features the artwork of Australian botanical artist, Celia Rosser. Ms. Rosser is renowned worldwide as an expert in illustrating the hundreds of banksias unique to Australia.

A passionate music lover, Ms Rosser and her son, Andrew regularly host numerous music recitals in their studio at Fish Creek in the South Gippsland region of Victoria.  Tinalley String Quartet performed at the studio in 2009 and we are thrilled to have featured Celia’s artwork on the cover.

Tinalley String Quartet has launched a new Pop-Up Concert Series.  The Series will see Tinalley ‘Pop-Up’ in unique venues around Australia, with limited notice, playing beloved repertoire and new, rarely played works … and all the concerts will be free!

In a time where technology rules and our lives are consumed by deadlines, Tinalley invites you to switch off the mobile … clock off for 45 minutes …  escape the workplace and immerse yourself in the power and intimacy of live music.  Together, we can discover new spaces; deepen community connections; explore unfamiliar music and be enthralled by beloved classics of repertory.   Catch up with a friend, bring a work colleague or come alone and let the music be your companion.

All Pop-Up Concerts will be advertised 3-4 weeks out from the event on social media and Eventbrite.

The Series will launch on October 11, 2018 at the magnificent Chapel at Trinity College, Parkville and feature two works, Mendelssohn’s Opus 13 Quartet, a work of fervent passion and operatic proportions and Arvo Pärt’s ‘Fratres’ for String Quartet.   At this particular event, Tinalley will invite patrons to make a donation to Drought Angels to assist drought affected farmers in NSW and QLD.

The Tinalley String Quartet will begin a new relationship with the University of Queensland in 2018 as Ensemble in Residence.  The residency will comprise numerous performances at the School of Music, UQ Arts Museum and Custom’s House as well as chamber music coaching and masterclasses.

“The appointment of the Tinalley String quartet is the culmination of a long term strategy to establish the School as a centre for chamber music education” said UQ Music Head of School Professor Margaret Barrett.   “The ensemble will contribute to the School through modelling exemplary chamber music performance practice, mentoring UQ student ensembles, and contributing to creative practice research.”

TSQ’s First violinist, Adam Chalabi who is also Associate Professor at the School of Music spoke of the residency “the quartet is particularly looking forward to becoming an integral part of the teaching fabric at the School of Music.”  Patrick Murphy, who was appointed as Tinalley’s new cellist earlier this year, is also based at UQ as Cello Performance Fellow.

The Tinalley String Quartet is thrilled to announce that its new recording of the Debussy and Ravel String Quartets will be released in March 2018 on the DECCA Australia label.  The album’s release coincides with global commemorations of the 100th anniverary of Debussy’s death (25 March 1918).

Recorded in May/June 2017 at the Melbourne Recital Centre with producer Stephen Snelleman and recording engineers Jim Atkins and Alex Stinson, this is Tinalley’s first release with DECCA.

Justin Williams, violist, explains the premise for the new album: ‘First and foremost, we chose to record the string quartets of Debussy and Ravel because we love them. They are wonderfully evocative works, extremely challenging to play and equally satisfying. Furthermore, the recording serves as our tribute to the life of two composers whose music has had a profound influence on 20th and 21st century writing. Tinalley String Quartet is honoured and humbled to be releasing this disc on Decca Classics Australia.’

Cyrus Meher-Homji, General Manager of Classics & Jazz at Universal Music Australia, says: ‘It is an absolute priveldge to be working with the Tinalley String Quartet on their latest album. Their wonderfully spirited playing will, I’m sure, be a welcome addition to the Decca catalogue’.

The Quartet is grateful for the extraordinary support of several donors and foundations, as well as the Australia Council for the Arts, who helped make the recording project possible.

Brisbane-based cellist, Patrick Murphy has been named as the new cellist with the Tinalley String Quartet.  Patrick will join the ensemble in January 2018.   A native of Perth, Patrick is an acclaimed chamber musician and cello pedagogue.  Currently based at the School of Music, University of Queensland as Cello Performance Fellow, he was previously a founding member of the Tankstream Quartet and has played with many prestigious Australian chamber ensembles including the Grainger String Quartet, the Southern Cross Soloists, the Australian String Quartet, Ensemble Q and the Sydney Soloists.  “I’m so thrilled and honoured to be joining the Tinalley String Quartet, having admired their work for years now” Patrick explains, “I can’t wait to dive back into the amazing repertoire for string quartet and to explore all sorts of other collaborations with this ensemble.”

“Patrick has a reputation as one of Australia’s finest cellists and chamber musicians, and his passion for playing string quartets was evident from the first moment we played with him” says founding member and 2nd violinist, Lerida Delbridge.  “We are absolutely thrilled to welcome him as we begin this new chapter in Tinalley’s life.”

Departing cellist Michelle Wood will perform with the quartet for the final time this weekend at the inaugural Tasmanian Chamber Music Festival.  As founding cellist, Michelle played with Tinalley for 14 years, during which time the Quartet won the 2005 Australian Chamber Music Competition and the 9th Banff International String Quartet Competition.

Patrick will first take the stage with the group in March, 2018 at the Adelaide Festival where the Quartet will premiere a reimagined chamber music adaptation of Nigel Westlake’s Compassion for Octet which Tinalley has commissioned.

The Tinalley String Quartet is thrilled to have been awarded funding by the Australia Council for the Arts to assist with two new recording projects scheduled for 2017.  Beginning in May, the Quartet will record the quartets of Ravel and Debussy, followed by the Opus 12 and 13 quartets of Mendelssohn together with a selection of Mendelssohn’s Songs and Songs without Words reimagined by Calvin Bowman, with operatic sensation, Greta Bradman.

In 2017, Tinalley will record in the state-of-the-art acoustics of the Melbourne Recital Centre, where the Quartet also presents its Melbourne Series.

Tinalley String Quartet has ended its 2016 Season with a sumptuous reception at Government House Sydney.  Hosted by the Quartet’s patron, His Excellency General The Honourable David Hurley AC DSC (Ret’d), Governor of New South Wales and Mrs Hurley (pictured below), the evening included a performance of Mendelssohn’s Opus 13 Quartet and the unveiling of the Quartet’s 2017 Series.  The evening was attended by invited guests of the Quartet and the Governor, including key industry identities, artists who collaborated with Tinalley in its 2016 Season, family members and Tinalley donors.  Check out Tinalley’s Instagram page for more images of the event. 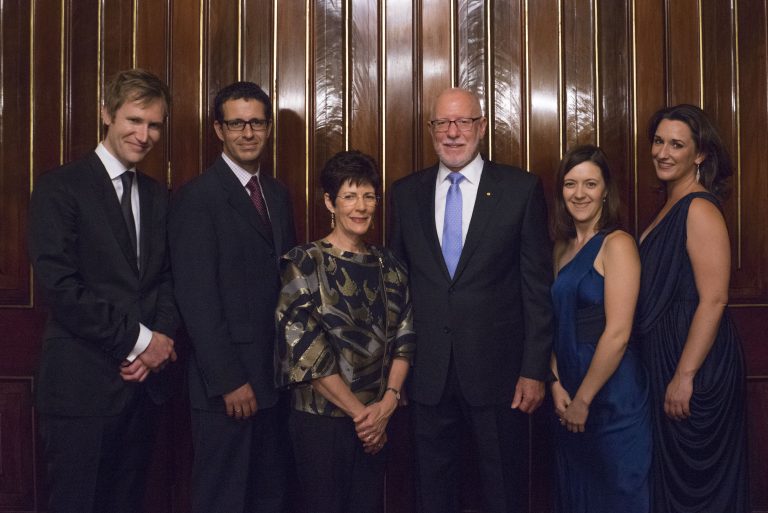